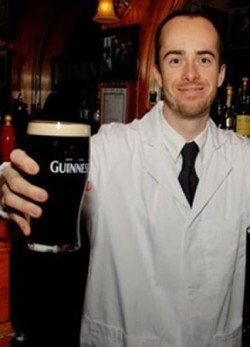 Born in Toronto, Canada, and raised in Galway, Ireland, Conor has gained the skills of hospitality on both sides of the pond. An Honours Degree graduate of Marketing from Galway-Mayo Institute of Technology, Conor started his trade behind the wood of the 4-Star Award-winning Galway Bay Hotel. It is there where Conor developed his whiskey pallet, cocktail flair, and his gift of the gab. In 2007, Conor took his well-established resume of Irish hospitality to the city of Toronto. It is here that he would establish himself as a senior Bartender at the renowned P.J. O'Brien's Irish Bar and Restaurant. Conor has become an ambassador to Irish whiskey and beers, a refreshing inventor of cocktails, and a standout voice behind the altar of P.J. O'Brien's. Now as Manager, Conor looks to exceed the expectations of the ever-changing trends and tastes of the Toronto patron. Through further extending the already impressive array of whiskeys, creating more unforgettable cocktail lists, pouring fresh Irish and local beers, or sampling exciting wines of the world. Conor along with the rest of the team at P.J. O'Brien's strive to maintain the title as best Irish pub in Canada, and further continue to bring a genuine taste and feel of Ireland to Toronto.